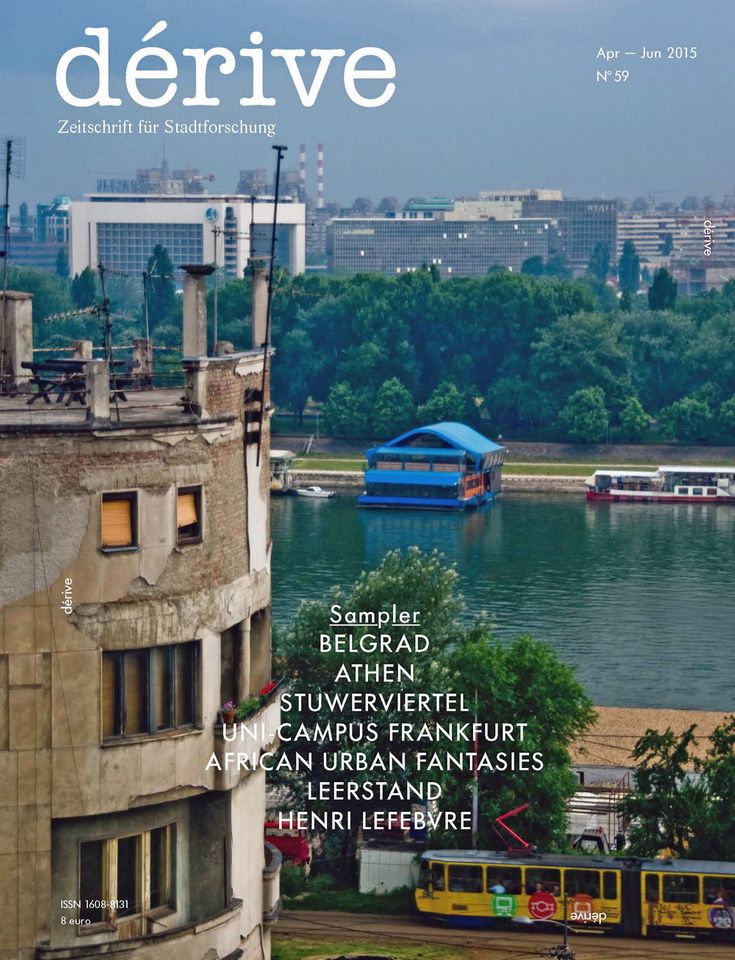 The language of boycott


Last summer as the violence in Gaza escalated, the mediatization of conflict in Palestine and Israel escalated, and its global audience grew. The already well-established international Boycott, Divestment, and Sanctions (BDS) movement grew in visibility, with new calls for petitions and actions initiated by BDS activists in different parts of the world. First formed in response to a 2005 call endorsed by more than 170 Palestinian political organizations for international »non-violent punitive …
Tags
Boykott, Israel, Palästina
Heft kaufen


Sarah Mendelsohn is an artist living in Vienna.

Last summer as the violence in Gaza escalated, the mediatization of conflict in Palestine and Israel escalated, and its global audience grew. The already well-established international Boycott, Divestment, and Sanctions (BDS) movement grew in visibility, with new calls for petitions and actions initiated by BDS activists in different parts of the world. First formed in response to a 2005 call endorsed by more than 170 Palestinian political organizations for international »non-violent punitive measures« against Israeli oppression of Palestinians, BDS now exists as an umbrella for many forms of activism, and a range of more specific political positions.[1] Though some do, not all BDS-affiliated initiatives advocate against the very existence of Israel. In June 2014 BDS activists created an Arts Coalition, to apply BDS tactics within international cultural spheres — »to create situations of discussion and learning about BDS and how it can be applied within the artistic and cultural field.« Subsequent calls for boycott in spheres of art and academia received a fair amount of media attention, in cases leading to changes in programming or the withdrawal of funding.[2]

This writing addresses the language surrounding recent cultural boycott movements levied against Israeli art and culture. What kinds of »situations of discussion« are these? Reflecting on »Challenging Double Standards: A Call Against the Boycott of Israeli Art and Society«, an open letter against cultural boycott collectively authored in Vienna, I want to consider several points outlined in the letter and some of the responses it has provoked.[3] Believing in its intention to advocate against »reductive binaries«, I also question aspects of the letter. I write from my own perspective, an American living in Vienna, someone learning through this experience about political attitudes and perceptions of racism and history in Austria and Central Europe. I write from a perspective of frustration and a desire to better understand my own discomfort: with the alienating density of much discourse about international boycott, and with the miscategorizations trenchant in discussions about Palestine and Israel—here, and in different ways, in the U.S. I also write from a perspective of distance. I have never even been to Israel or Palestine.

The violence of discourse in no way stacks up against the life-and-death violence committed by military powers, extremists, and civilians. How do these very different levels of action intersect? The Internet and the world are not always so distinct, but sometimes »the Internet is faster than the world.«[4] Online commentary often breeds antagonism instead of discussion: the looping comment thread that grows more and more terse as you scroll down.[5] I almost always stop reading. How can writing address the difficulty and potential violence inherent in language itself?

Last July a group in Vienna began drafting an open letter against the harmful implications of boycotting Israeli art and society: focusing on the anti-Semitic undercurrents of much BDS activism in Europe, the ethical and intellectual double standards applied to Israel in much Western-leftist activism, and the misapplication of boycott as a potentially powerful political strategy. The group included about twenty artists, writers, curators, and social scientists from different places and cultural backgrounds. Having just moved to Vienna, in October I helped with the later rounds of editing the letter, which was posted online later that month, and then publicized more broadly over the next weeks. By now it’s been re-posted and distributed variously through the Internet.[6]

Last August, I joined about two thousand people in Los Angeles in a protest organized chiefly against the U.S. economic support of the Israeli military.[7] Several gestures during the three-mile march from the Wilshire Federal Building to the Consulate General of Israel continued to preoccupy me after I arrived in Vienna a few weeks later:

Banners featuring hand-drawn swastikas; slogans equating Netanyahu with Hitler; a performance staged on the sidewalk, for which a young woman wore a sheet and cradled a baby doll, both of them stretched out on the ground covered in fake blood.

A small group of counter-protestors carried Israeli flags. After a rift between the two protests, the LAPD arrested a young Libyan-American Palestinian solidarity activist. Over the following week as an activist group tried to raise money for her bail, arguments circulated that her arrest was a racist act.

Thousands of people walked beneath an overpass chanting via human microphone: »from the river to the sea, Palestine will be free.« »Intifada, intifada.«

These images help illustrate two ways that miscategorizations occur when international Palestinian solidarity groups pit themselves unilaterally against Israel or Israelis. Miscategorization takes form first through language—through suggestive poetics, symbolic substitution, or historical comparison—and second, through a collapsing of context and immediate and distant experience. This collapsing makes it possible to make the psychosocial leap from downtown L.A. to Gaza Beach through the effervescence of thousands of bodies in public. As in the bloody baby doll performance outside the Federal Building, in discourse surrounding boycott movements, Israel often comes to symbolize colonialism at-large—through actions such as the annual international ›Israeli Apartheid Week‹.[8] Questions about how to advocate against violence from a distance, and how to recognize the specificity of anyone’s being-implicated, are often either not present or obscured. Miscategorization occurs through language in immediate and in more elusive ways.[9] For example, Yahūd, the Arabic word for both Israelis and Jews, is also used derogatively. As a friend living in Ramallah tries to explain this to me in English over Skype, and as I report it back to the best of my understanding, there are two miscategorizations: the initial conflation inherent in the word, and then in my inability to adequately address the specific register or implication that Yahūd has for people who use the word in daily speech. The conflation is of course revealing, but does not work the same way when the conflation is assumed in English or German. In Europe and in the U.S., the conflation of Israeli and Jew disregards the Christians, Muslims, Druze, Bedouins, agnostics, and other non-Jews who carry Israeli passports. And, more elusively, it whitens Jewishness, disregarding Arab Jews, Sephardic Jews, Ethiopian Jews… Such miscategorization supports one too-easy reading of history that equates all Israelis with colonialists, taking Israel’s hybrid British and American colonial arms to represent a whole society. This simplification makes it harder to actually criticize the actions of Israel’s government, and of the U.S. and British governments; to comprehend the lack of political cohesion and adequate representation in Palestine; and to question the responsibilities of citizens living within a military-democracy to resist its government’s crimes. It buries the specificity of Israel’s crimes, and the specificity of its colonial history and ties to British and American colonial histories.[10] But the conflation expressed by Yahūd, spoken in Ramallah, carries a different weight.

Miscategorization occurs through reductive historical comparisons, which can resemble racist or anti-Semitic tropes—such as the leveling of Netanyahu and Hitler. A different but parallel problematic emerges among the designations in English for the representative body of the Palestinian people: Hamas, the Palestinian Authority, »civil society«?[11] Who is that? Can anyone represent anyone but themselves? The old practices of othering obscure what I find the best reason to boycott the Israeli and U.S. governments: the mutual support between the U.S. and Israeli governments through capital investment, the development of weapons, and check on power within the Middle East.[12] There is a big difference between protesting this direct support of violence, and boycotting an arts organization that may be trying to support critical voices, Israeli or otherwise. In cases where arts funding comes directly from the Israeli government, this becomes more complicated. I wonder if underlying cultural boycott is a broader frustration with how inexorably intertwined our present funding structures are with war.

Art is a special category of boycott: an arena in which to model or enact forms of resistance—that is also supported by complex funding structures. The ongoing cultural boycott actions that have come to media attention propose differing agendas and to some extent reflect different contexts—I do not want to conflate them all. But, in the case of cultural boycott efforts where the object of boycott is not directly connected to the government, but more tenuously affiliated to being Israeli, there is the danger that having any connection to Israeli society constitutes grounds for boycott. This has the potential to inhibit critical Israeli activism. These implications carry different cultural weight in the U.S. than in Central Europe, where anti-Semitism remains for many ever-present—many jump more readily from anti-Israeli sentiment to anti-Semitism, and move more readily to take the defensive along these lines.

As in the U.S., in Europe I find the use of historical comparison counter-productive but revealing. Several friends have objected to the series of comparisons outlined within the CDS letter between Israel and contexts of oppression or occupation in other countries, finding this approach problematic for two reasons: that it unintentionally conflates these other contexts, and that this strategy seems to take a defensive position. Though I understand the polemic of this part of the letter—that actually there are abundant reasons to protest the actions of many governments, and that too often the case of Israel is unproductively fetishized—I also agree that these comparisons can be read as provocative and fraught. Further, I worry that such an approach seems to alienate history, rather than encouraging a re-reading of history in relation to the present. The political project should be to strengthen sympathetic, critical Israeli and American responses, rather than alienate or polarize them.

As in much political discourse, the volume and density of online commentary surrounding boycott—that is in many ways the propeller of both the movements and counter-movements—have an effect of tightening. Language becomes restrictive and confusing. I don’t think every protestor yelling »intifada« in L.A. last summer knew the weight of the word. And fewer would, if called on, be able to explain how they thought invoking intifada in L.A. would achieve solidarity. But, what does solidarity mean—here in Vienna, or in L.A.? What is achieved by chanting, or by adding your name to a list of online signatures? How do these acts contribute to the named projects of peace building, or of resistance?

One possible answer is that solidarity means moral or emotional fulfillment and abdication. I think this word is used in hopes of recognizing the simultaneous complicity and irrelevance of carrying a passport of a nation whose international acts you cannot reconcile with your own politics. Many in L.A., as elsewhere in the U.S. this summer and in the months since then, moved easily to draw connections between Gaza and Ferguson in broader discussions about structural violence and the militarization of power in the United States. In Central Europe, one tendency is to collapse the contexts of cultural boycott movements with recent expressions of anti-Semitism in Europe. I personally would advocate approaching these contexts, the boycott of Israel, violence in the U.S., and racism in Europe (recent anti-Semitic as well as anti-Muslim acts) as distinct but overlapping contexts. Taking one context to question another can be useful, but this rarely happens sensitively, and often instead antagonistically.[13] Even bracketing the questionable arrest of a young black activist at the August second demonstration in L.A., it was clear to me from the feeling of the yelling and chanting that the call to »intifada« was at least in part a projection, a filter for a much more local experience.