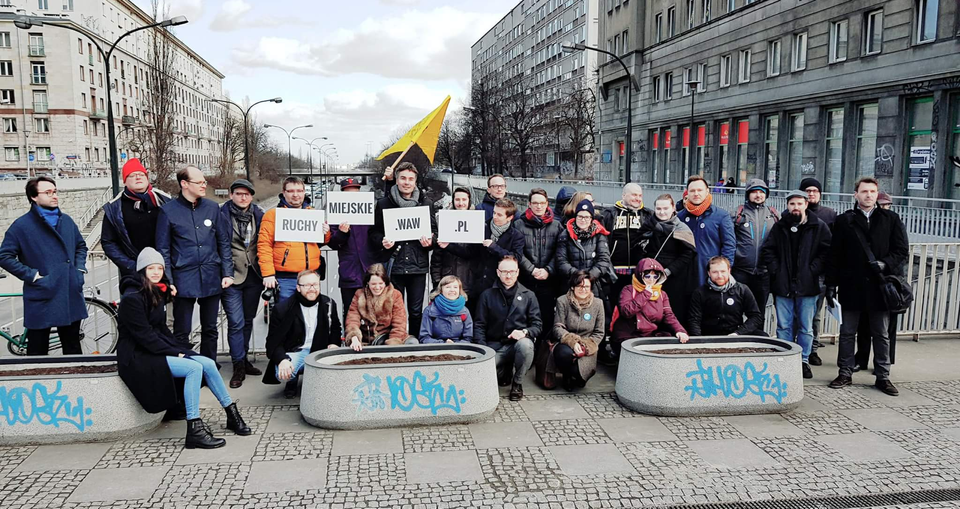 Activists from Ruchy Miejskie dla Warszawy (Urban Movement Coalition in Warsaw). Together they will run for this year’s local elections in Warsaw.
Christoph Laimer, Tymon Radwanski

In Polish cities fundamental problems have been growing for years, hindering their development and lowering the quality of life for inhabitants. That’s one of the reasons why Poland now has a strong urban social movement, and has had for several years. In numerous cities, groups that refer to the right to the city idea or have a municipal orientation are active and quite a few are also represented in local parliaments. To deepen cooperation between these grassroots initiatives, the Kongres Ruchów Miejskich (Congress of Urban Movements) was established in 2011. Several initiatives based on the interaction of various urban movements at the national level have already emerged. In 2013 Miasto Jest Nasze (The City is Ours) was founded in Warsaw and, in 2014, the party had already fielded candidates in the local elections. Tymon Radwan´ski is an activist for Miasto Jest Nasze and one of the organizers of the forthcoming Fearless Cities Conference in Warsaw. Christoph Laimer from dérive asked him a few questions about the urban social movement in Poland and especially in Warsaw.