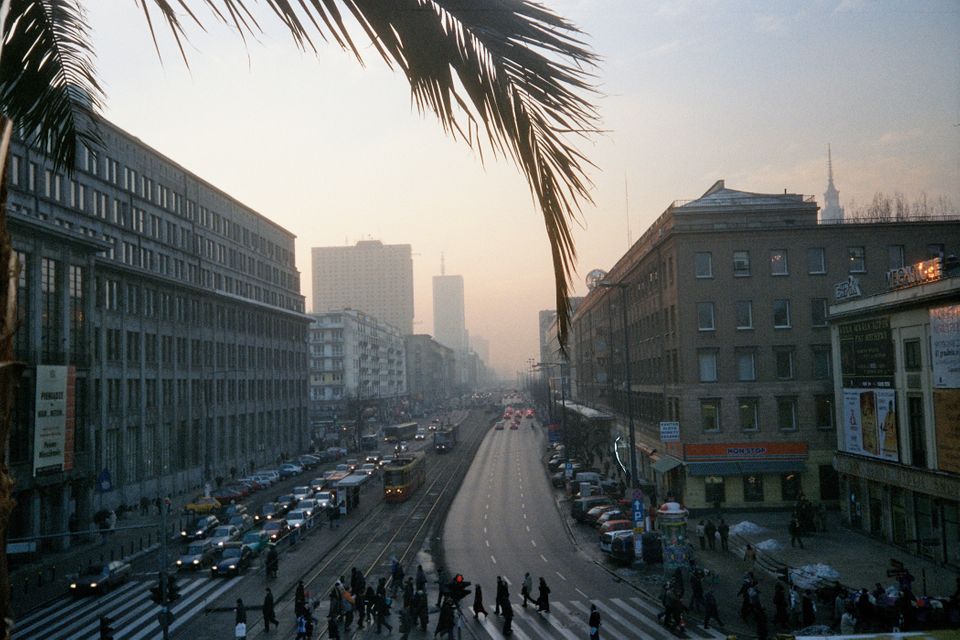 There are two types of cities. Some are talkative – they churn out one story after another. Denizens in New York City, Paris, Beirut or Tokyo, when asked about the city they live in, will openly and gladly tell you what makes their city special. Such narratives usually add up to a coherent picture of local urban identity. Warsaw belongs to the other group – that of taciturn cities. It does not have a predefined identity, and when asked about their city, Warsavians’ knee-jerk reaction is either to ask the outsider for their view or to change the subject.


is Assistant Professor of Anthropology and Urban Studies at the Warsaw University. He writes about class, space and uneven development.

There are two types of cities. Some are talkative – they churn out one story after another. Denizens in New York City, Paris, Beirut or Tokyo, when asked about the city they live in, will openly and gladly tell you what makes their city special. Such narratives usually add up to a coherent picture of local urban identity. Warsaw belongs to the other group – that of taciturn cities. It does not have a predefined identity, and when asked about their city, Warsavians’ knee-jerk reaction is either to ask the outsider for their view or to change the subject.
When it does speak up, Warsaw communicates through its walls. Coming from western Poland, when I first moved to Warsaw, I was shocked by the number of plaques commemorating national figures or acts of violence committed during World War II. The city’s veneer is coated with records of historical trauma. In this sense Warsaw is the very capital of what Timothy Snyder dubbed »bloodlands« – a vast territory »between Hitler and Stalin« that saw the murder of some 14 million people between 1933 and 1945. Reduced to ashes in 1944, Warsaw is one of the rare cases of a city that really started anew. But everybody remembers 1 August, when year after year in what is perhaps the most Varsovian of acts, the whole city stops for a minute to commemorate the 200,000 victims of the Warsaw Uprising.

And then there is the urban fabric, which makes Warsaw so unusual that it does not resemble a proper city. It has no centre, or is in fact multicentric, with each small-scale centre being slightly off-centre. Back in the early 2000s, Warsaw was colloquially referred to as a concrete camping site. Krakow or Wrocław – centres with a more continuous urban history and with more charm –were considered proper cities. No wonder one of the most famous music bands from Warsaw is the Warsaw Village Band. Yet, there is an order behind what seems like a random patchwork. In her essay reprinted in this issue of dérive, Joanna Kusiak shows how Warsaw’s urban fabric – elusive and nonintuitive at first glance – represents a palimpsest of many attempts to break with history. In this sense, Warsaw is a city that continuously starts anew.

Warsaw is a city that continuously starts anew

While the sense of looming history is indisputable and visible in the omnipresent fingerprints of the past, the city’s chaotic geography has become the fulcrum of possibility and change. As a consequence, one of the most quintessentially Warsavian debates has been on Warsaw’s actual geographical location. The three essays we reprint here as Retroactive Manifestos attest to the eerie sense of ambiguity as to where Warsaw actually is. In their Warszawa Funkcjonalna research manifesto from 1934, Szymon Syrkus and Jan Chmielewski start their analysis from a bird’s-eye perspective, looking at the larger international flows and networks in which Warsaw is enmeshed. Their text comprises a number of consecutive analytical steps, which are also visually represented in the corresponding maps. We reprint only the first eight of those steps, but the final outcome – the Warszawa Funkcjonalna diagram – is the cartographic theory of what constitutes, to borrow David Harvey’s phrase, the »structured urban coherence« of Warsaw.
Just ten years after Warszawa Funkcjonalna was published, Warsaw was destroyed and a new city erected in its place. Yet a comparison of a map of contemporary Warsaw with the Warszawa Funkcjonalna diagram shows that the city actually did grow according to the logic Syrkus and Chmielewski had predicted. The most traumatic of events – the Warsaw Uprising and the Nazis’ destruction of the city – did little in the way of altering Warsaw’s innate trajectory. The other two manifestos – excerpts from the 1951 book entitled The Six-year Plan for Warsaw’s Reconstruction and an essay by Bohdan Jałowiecki – also pose the geographical question. Jałowiecki, in a gesture that generated a heated debate back in 2006, argues that Warsaw is not becoming a dead ringer for a Western city but instead belongs to the family of cities from the Global South. These texts are separated by long decades and each is dedicated to a very different Warsaw. But if there is anything they have in common, then it is the sense of Warsaw being somehow out of step in terms of its geography, its actual location in the world at large.
This geographical ambiguity is a source of discontents for inhabitants (and perhaps the reason why Warsaw does not have a clear-cut identity) but represents a great opportunity for urban researchers. This is why the current issue of dérive coincides with the 28th annual conference of the International Network for Urban Research and Action (INURA). The conference will be a week-long encounter between international and local urban scholars and activists, who will – together – try to think about Warsaw’ structured coherence and answer the question of what makes it unique as a city.
Because of Warsaw’s reluctance to embrace an explicit urban self-identity, it has often been spoken about as a site where other, non-urban, processes unfold – such as a putative transition from state socialism to market capitalism. But what does labelling Warsaw a post-socialist city actually mean? Instead of defining Warsaw according to what it no longer is (a socialist city) or what, in theory, it is supposed to become (a poster child for market capitalism), we will delve into places and processes that define Warsaw’s contemporary mien. To this end, we will employ INURA’s unique conference format – talking about cities in the actual urban space and not inspecting Powerpoint slides in air-conditioned rooms.
We will therefore study Warsaw from the bottom up and treat it as a theoretical clean slate. Thus, we will forget about jumbo theories and turn to elements of everyday life in Warsaw: housing, transit, labour, consumption, migration, its natures and its non-human denizens. It may turn out that, for example, the annus mirabilis of 1989 does not constitute a watershed in Warsaw’s trajectory after all. Instead, longer continuities may be at work, and more recent forces may have shaken the city to its core. On the one hand, Warszawa Funkcjonalna turned out to have been uncannily precise in defining the pattern of Warsaw’s spatial expansion, despite the dramatic intrusions that the city experienced. Conversely, Poland’s 2004 accession to the European Union ushered in flows of capital that engendered entirely new spaces as well as redefining some extant ones, substantially unsettling the city and altering its position in various networks (global, national). It may be the case that Warsaw is positioned in an entirely different place.
We hope our peripatetic intellectual experiment and the encounter between local and international researchers will reinvigorate urban theory. Walking and thinking have always been intertwined. Beginning with ancient philosophers, through Rousseau and Kierkegaard and from modernist flâneurs to urban ethnographers, many theories have originated from a surprise peripatetic discovery or a chance encounter. Recently, there has been plenty of jumbo-sized theorising about the urbanization of our planet, and we have a plethora of microstudies either describing certain places or dissecting specific urban issues. With a few exceptions (such as Filip de Boeck’s work on Kinshasa and Hidenobu Jinnai’s work on Tokyo), we are in dire need of research that shows how various fragments are, as de Boeck put it, sutured together. When Jinnai set off to walk the streets of Tokyo in the 1980s, he probably did not expect his peregrinations to allow him to discover a planning paradigm that had never been formally expressed but in fact explains precisely how his city came about and how it works. The point of departure for Jinnai’s discovery was walking.
By the same token, a novel theory that stitches contemporary Warsaw together into a coherent whole may be just around the corner. We need only make our way there.

Kacper Pobłocki is Assistant Professor of Anthropology and Urban Studies at the Warsaw University. He writes about class, space and uneven development. He used to be an urban activist and led the Alliance of Urban Movements that ran in 2014 in municipal elections in eleven Polish cities. In 2017 his book Kapitalizm historia krotkiego trwania (Spatial origins of capitalism the English edition forthcoming) came out.