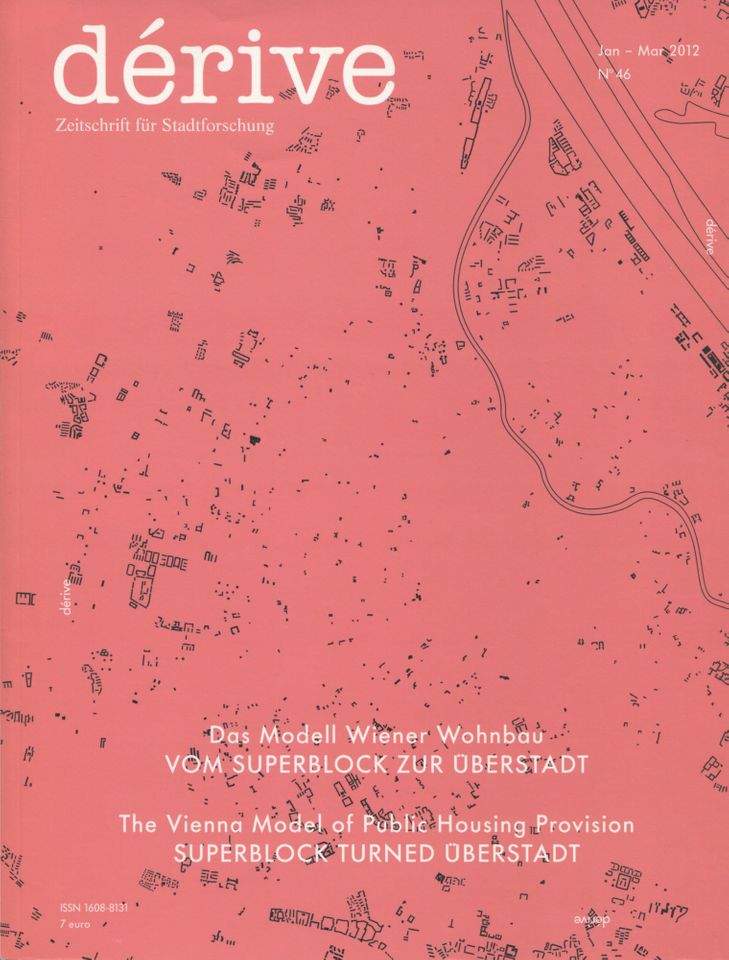 
This glossary is a tool for the »modelling Vienna« team to engage in the international discourse on housing provision. We refer to the terms as we learn of their use according to rhetorical consensus at an institutional level. the aim of this ongoing process is to frame the complexity and reach of a housing system and its institutions in ways that allow for translation not only literally (German-English) but also into different housing policies. the glossary at first explains a term’s general …
Tags
Sozialer Wohnbau, Wohnen, Wohnungspolitik, Wohnbau
Heft kaufen


Andreas Rumpfhuber is an architect and researcher in Vienna.


Georg Kolmayr is a Vienna-based architect and researcher specialized in housing and urban development. Besides teaching at the Institute for Architecture and Design at the TU Vienna, he has run his own office since 2004.

This glossary is a tool for the »modelling Vienna« team to engage in the international discourse on housing provision. We refer to the terms as we learn of their use according to rhetorical consensus at an institutional level. the aim of this ongoing process is to frame the complexity and reach of a housing system and its institutions in ways that allow for translation not only literally (German-English) but also into different housing policies. the glossary at first explains a term’s general application, to then point at its use in the specific Viennese situation.

Affordability : Leistbarkeit
The term »affordability« refers to the percentage of disposable income a household spends on all (→) housing expenses. Generally, no more than 30% is deemed affordable.
Vienna: in 2006 housing expenses in Austria averaged at 19.1% of household income; EU: 23%; GB: 18.2%. (Lugger & Amann 2006)

Allocation of Tenants : Wohnungsvergabe (Mieterbelegung)
(← Housing Policy)
Market mechanisms of supply and demand aside, an active housing policy regulates the allocation of tenants, at least in parts of the socially bound housing stock.
Vienna: Due to the City’s large (→) municipal housing stock, its housing department (MA 50; Wiener Wohnen) allocates tenants along official guidelines within all public housing and also, due to (→) funding regulations, does so for parts of (→) subsidised housing.

Area Renewal Office : Gebietsbetreuung
(← Promotion of Housing Renewals)
Vienna: facility installed by the City’s housing department at local level. Run by independent architectural or developer practices. Aside from the management and facilitation of urban renewal projects, these offices take on a wide range of communicative tasks within a neighbourhood, empowering initiatives and participatory movements at local level.

Building Industry : Bauindustrie
(← Housing Market)
The building industries’ interests and capacities influence the production and renewal of housing to a large extent, as is clearly visible in the materiality of whole cultural areas.
Vienna: Though the architecture of »Gründerzeit« as well as that of »Red Vienna« was largely realised in brickwork and with an abundance of cheap labour, the prevailing building technique shifted after WWII and along with economic up-rise to prefabricated concrete structures. To this day anything but solid construction is exotic to Viennese housing production, even in small-scale developments. The fact that in Austria the idea of sustainable building is almost exclusively linked to thermal insulation hints at the prevalence of the industry.

Emergency Flats : Notfallswohnungen
(← Housing Policy)
Vienna: Some 2000 flats, predominantly situated in municipal housing estates, to be assigned on short notice to persons in acute need. The individual requests are assessed according to strict criteria.

Housing Developer Competition : Bauträgerwettbewerb
(← Promotion of Housing Construction)
Vienna: Procedure for the allocation of object subsidies obligatory to housing projects larger than 200 units. This competition asks developers to team up with architects and other planning experts in order to propose a housing project which, if successful, will be granted promotion and building site by the City. Submissions are judged by a jury identical to the (→) property advisory board along the following criteria:

Housing Market : Wohnungsmarkt
If the utopian »perfect market« in which an »invisible hand« regulates pricing in a free interplay between supply and demand hardly ever fits reality, it does even less so in the real estate market and its housing sector. This market is subject to a series of specific limitations such as the immobility of its goods, the inhomogeneous character of its goods and the asymmetric flow of information between participants and blindness to social issues. Those shortcomings are dealt with in different (→) housing policies and (→) housing politics, leading to very different local market situations. Vienna enjoys a low average rent level (an average of 8.0 Euro/m net rent on the free market segment for new tenancies) with high quality standards (e.g.: 42 m2 of living space per capita).

Housing Policy : Wohnpolitik auch Wohnungspolitik
Deals with shortcomings in the housing market. Two sets of instruments ensure the public authority’s influence on the housing market: 1.(→) legislative regulation and 2.public promotion such as (→) governmental subsidies. But housing policy is not restricted to government bodies; its stakeholders are widely spread in the field of (→) social housing and work on different scale levels.
Vienna: Due to the city’s unusually high influence on housing provision, housing policy is mainly controlled by the municipality’s agents and interests.

Housing Promotion, also Direct Subsidies : Wohnbauförderung auch Direktförderung
(← Governmental Subsidies)
By actively promoting the production or renewal of housing (→) object subsidies or by supporting individuals to gain access to affordable housing (→) subject subsidies, communities try to influence the housing market’s pricing and standards.
Vienna / Austria: Vienna falls underAustria’s federal housing promotion program, which is financed at federal level by taxes (Contribution to Housing Promotion, dt.: Wohnbauförderungsbeitrag) and distributed by the different federal states in the form of loans or grants. The City of Vienna maintains a mixed system of housing promotion with an emphasis on (→) object subsidies above (→) subject subsidies. Housing promotion is managed by the Municipal Department 50 (MA 50): Housing Promotion and Arbitration Board for Legal Housing Matters. Housing Promotion amounts to 1.2% of the Austrian BIP.

Integrated Market : Integrierter Markt
(→ Housing Market)
In an integrated market the social housing sector is able to compete for a broad range of consumers due to its large volume and the financial stability of its suppliers. Vienna: Due to its large stock of (→) municipal housing and a continuous policy of (→) housing promotion, the City of Vienna is capable of maintaining an integrated market with a comparatively low rent level.

Limited Profit Housing Association (LPHA) : Gemeinnütziger Wohnbauträger
(← Social Housing)
Co-operatives or limited profit companies, which provide socially bound housing at low cost rent. Their profits are legally restricted and they are subject to governmental control; they do, however, benefit from inherent financial guarantees.
Vienna: Limited profit housing associations took over the task of producing affordable housing from the City. Following the implementation of the (→) housing developer competition in 1995, they now have to compete with commercial developers for housing subsidies.

Municipal Housing, also Public Housing: Gemeindeeigenes Wohnen, Wien: »Gemeindebau«
(← Social Housing)
Housing built, maintained and managed by public authorities in order that sufficient affordable housing is available. Public housing is a historic model of housing policy that has long been abandoned in most places.
Vienna: Ever since the housing schemes of »Red Vienna«, public housing has been of pivotal importance not only to the City’s policy but also within the public imagination. Although it abandoned the production of housing in the 1990s (handing it over to limited profit developers), the City resisted selling its housing stock and still has some 220.000 units at its disposal.

Promotion of Housing Construction : Neubauförderung (← Object Subsidy)
Vienna: Applicants have to apply for (→) funding regulations and above that to pass the City’s (→) property advisory board in order to be granted subsidies. Bigger projects are compulsory subject to (→) housing developer competition. Nearly 90% of all housing erected in the Vienna last couple of years has been subsidized.

Promotion of Housing Renewals : Sanierungsförderung (← Object Subsidy)
Vienna: Since urban renewal became an acknowledged alternative to large scale restructuring in the 1980s, a significant share of object subsidies has flowed into the renewal of housing stock.

Property Advisory Board : Grundstücksbeirat (← Promotion of Housing Construction)
Vienna: This board was implemented as an instrument for quality management and is hosted by the wohnfond_wien (the body which administrates all object subsidies for the city). Any housing project applying for subsidies has to pass this board, which also constitutes the housing developer competitions’ jury. It is composed of some 12 members from different fields (with the city’s representatives in minority), who hold their posts for three years each.

Protection of Tenants : Mieterschutz
(← Regulative Instruments)
Legal regulation of the relations between tenant and landlord, covering both protection against eviction and rent price protection.
Vienna: From the social achievements of the 1920s on, tenancy protection has had a key role in Austrian housing politics. Even if tenancy laws were gradually liberalized in subsequent years, the rental market is still highly regulated.

Right to Buy : Mietkauf, Mietkaufrecht
(← Modes of Subsidized Housing) System that allows the tenant to buy the flat he rents under certain circumstances.
Vienna: Promoted in the form of ownership options since the 1990s, this form of dwelling seems to be less attractive than elsewhere for tenants and developers alike. It is, however, on offer as one of the (→) modes of subsidised housing.

Subject Subsidies, also: Housing Allowances : Subjektförderung auch Wohnbeihilfe
(← Direct Subsidies)
In contrast to (→) object subsidies, housing allowances go directly to the individual applicant and serve to gap the difference between affordable housing expenses and market prices. Housing allowances are seen as precise and manageable tools, but they tend to deepen the overall effects of economic crisis and are considered to exacerbate undesirable social developments such as stigmatisation or the »poverty trap«. Vienna relies on a mixed system of object and subject subsidies, in which the latter plays a secondary role. In 2007, only 3—4% of all Austrian households obtained individual allowances. However, with the impact of the current financial crisis and the housing promotion budget cuts at large, the proportion of subject subsidies is on the rise at the expense of object subsidies.

Superpromotion : Superförderung
(← Modes of Subsidized Housing)
Vienna: A mode of subsidisation that aims at providing housing for people with few financing options by reducing the initial capital required (non- recurrent contributions to real estate and construction costs) and in turn increasing monthly rents.

Social Housing : Sozialer Wohnbau
Encompasses housing either directly owned and managed by the public authorities or housing which is socially bound in exchange for public subsidisation of one form or another. Vienna: With some 220.300 flats, the City of Vienna owns and manages a large stock of (→) public housing as an historical heritage (»Gemeindebau«). Together with some 168.300 subsidised flats (→ housing promotion) this amounts to 388.600 social housing units or 48% of all housing stock in Vienna.